Australia isn’t the first country in the world to see a sudden spurt in resident population. However, learning from the best practices and mistakes of other cities is critical for us to ensure that we continue to have infrastructure that caters to every segment of the population – those who drive, ride or walk.
In the first part of this article, we touched upon some of the primary places that pedestrians could face situations that could result in accidents and some possible ways to mitigate that risk.

The onus to a large extent lies with the architects, designers and builders of the infrastructural components of our cities. The safety aspects need to be built into the plans to ensure that people have safe access to the buildings and structures from day 1.

In this extension of the previous article, we look inside and outside of Australia to identify some examples where innovation and initiative have made the pedestrians safer.

Examples from around the world

It goes without saying that a pedestrian friendly city is a superior city. Increased foot traffic brings social benefits, economic prosperity to local business, enhanced quality of life and convenient access to essential services to name just a few.

The concept of “Woonerf” began in Europe around the 1960’s, and it is a design concept which favours pedestrians rather than cars. Both can co-exist within the same space harmoniously, but pedestrians have right of way and priority. This design principle is commonly used in town centres where it helps ease congestion and spur on economic/social vitality. Often it involves the removal of kerbs, street signs and traffic lights in addition to narrowing of the road. This is done to change driver behaviour and encourage a heightened level of awareness for pedestrians, and studies have shown no adverse effects on safety.

Here are a few examples of shared space from around the world.

Once a busy city street, George Street is undergoing pedestrianisation and will only be open to delivery vehicles, taxis and the new light rail service. It will be transformed into a vibrant space with wide footpaths, convenient access to other parts of the city, window shopping and access to the light rail. Excellent use of lighting, signage, planting and more to keep everyone safe. Stockholm is committed to pedestrian safety, and is now considered the ultimate walkable city. The city has undergone a design transformation, and careful attention has been paid towards the vision impaired and differently abled community. Design changes include converting 5200 pedestrian crossings to the Stockholm Model featuring acoustic signals + arrows on the box pointing in the direction of the crossing, high-contrast markings for kerbs, steps and bus stops, handrails, improved footpaths and congestion tolls for vehicles. In 2014, Seattle ranked as the safest city for pedestrians in the USA. This is the result of education programs targeting poor driver behaviour and encouraging pedestrian right of way, addition of 501 pedestrian crossings, installation of accessible pedestrian signals which speak, beep and vibrate to assist visually impaired, longer signal times, better lighting and more. It doesn’t take much to enhance the safety for all pedestrians. When designing infrastructure, it is important that urban planners, engineers and architects take the viewpoints of the differently abled community into consideration. Subtle changes to design such as high-contrast markings to indicate safe places to cross, the installation of accessible pedestrian signals, mid crossing refuges, speed bumps, bollards, adequate lighting and more will go a long way to changing driver behaviour, enhancing awareness for pedestrians and ensuring safer communities for all.

Technology will also play a big role in the coming years, with Melbourne currently in the middle of an eight-month pilot program which makes use of Bluetooth beacons installed at key points of Southern Cross Rail terminal. They work in conjunction with smartphone app Blindsquare as well as GPS to provide additional navigational aid to the visually impaired, for example it can provide directional awareness as well as highlight upcoming hazards such as stairs or doors.

Rather than making pedestrian zones merely compliant, we must embrace a shift towards making them useable, safe and accessible for everyone. Pedestrian friendly cities are better for us all, and with great design there is no limit to what can be achieved.

Get industry and product news delivered to your inbox monthly

Visualise Your Product in 3D
See how the Classic 3D/AR Technology can revolutionise your product selections. Questions? Get in Touch With Us
Questions 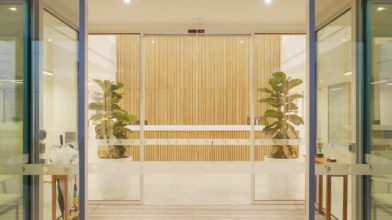 Understanding the Importance of Floor Safety

Uphold the safety and compliance of your facility with... Supporting drivers and pedestrians to exist harmoniously in a...